Posted on Tuesday, January 24, 2023 by The Restaurant Guy

This is part of a batch of news from early January:

Reader Primetime tells me that The Ellwood, formerly Beachside Bar – Café, was pounded by the recent storm: “Waves that hit with a ‘boom’ damaged a restaurant under construction at Goleta Beach and left the parking lot and recreation areas badly swamped. It happened early Thursday morning when the explosive mix of a high tide and a relentless storm surge arrived without much notice. Debris went flying into the windows at the former Beachside Bar – Cafe being converted into the Ellwood restaurant in a prime spot next to the Goleta pier. Some of the windows were broken apart and salt water found its way into the building from several locations. That dunked construction plans, supplies, kitchen equipment and turned a dining room into a lake. The building is leased by the county to the restaurant operator who hopes emergency funds can help with the recovery.”

Reader Primetime says that Shoreline Beach Café had a close call: “By inches, the Shoreline Beach Cafe survives the storm surge. at Leadbetter Beach in Santa Barbara.  Customers can still watch the action with their feet in the sand or from an elevated deck.  A close call.  In 1983 it was swamped and palm trees were down all over.” 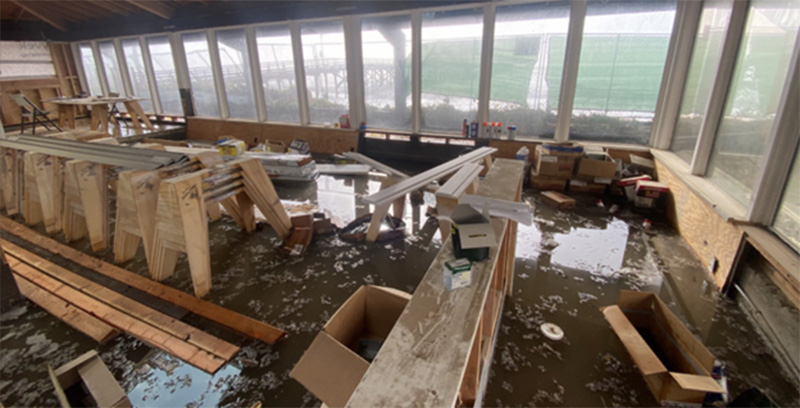 The Ellwood photo by Primetime