Posted on Monday, December 12, 2022 by The Restaurant Guy

The Black Sheep “SB Brasserie” opens Friday, December 16th at 18 East Cota Street, around the corner from Joe’s Cafe. This turn of the century historic building has housed many eccentric tenants over the last century including one of Santa Barbara’s most beloved original French Restaurants, Mousse Odile, in the eighties and nineties.

The vision from local co-owners General Manager Ruben Perez and Chef Jake Reimer is that of a modern classic Santa Barbara brasserie (French kitchen and Pub) that captures the story of Old Town Santa Barbara and an ode to Mousse Odile.

“We really wanted to do something special in the community,” says Reimer. “We are a California French Pub from locals to locals where the food is super elevated, with a great wine list, great beers, a casual atmosphere, but we are really executing at a higher level. We listened to what the public was asking us and wanting, and there was such a great cult following at the last Black Sheep [on Ortega Street] so what we did was infused the old Mousse Odile with The Black Sheep.”

The menus at The Black Sheep feature fun farmers market driven items changing often with the season as well as feature some classics and favorites that will remain staples. “We felt with so many restaurants having absentee owners or from out of town lately that we could really deliver a unique special experience for everyone to join,” says Perez. “We all love what we do every day and feel it is not only our passion but our privilege to share with all of you and our team the love you have shown us over the last two decades. It truly has been a humbling and fantastic experience getting to know so many people here who share our passion for food and wine.” Call (805) 965-1113 or visit blacksheepsb.com.

When designing the menus and concept we asked hundreds of locals and supporters of The Black Sheep what they would like to see for their future dining experience and got a ton of great constructive feedback. We believe and hope that we have arrived at a vision that will appease almost everyone.

Our menus will feature fun farmers market driven items changing often with the season as well as feature some classics and favorites that will remain staples. We don’t want to give away the farm sort of speak with all the surprises we have in store but here is a sneak peek at a handful of items that you may see throughout the year.

For the bar menu how about a……
Bahn Mi French Dip – Slow Braised Iberico Pork cheeks and pate are layered on a crusty fresh baked baguette with a spicy sprouting salad and served with a bowl of house made “Pho” for dipping.

Black Sheep has been known for their incredible care of fish and seafood creations and the tradition will carry on!

Creations such as a Jar of Channel Island Ling Cod Bacalao with Black Truffle or how about a beautifully seared local white sea bass with vegetables from Earth Trine Farms.

Are you thinking meat and potatoes? The 48 day Dry Aged Bavette Steak might do the trick (A Mousse Odile Favorite)  Delivered sizzling sliced off the bone and Nestled around a rasher of Hand Cut Pomme Frites and Parisian sauce or flamed with Cognac and poured over with green peppercorn “au pouvre”

Its rare to find an eatery these days that takes as much pride in their plant based dishes as the rest of the menu.  You can order a 3,4 or 5 course plant based, vegan tasting menu daily or order one of our innovative vegan dishes such as our Vadouvan Roasted Cauliflower With Homemade Harissa & Cashew Dukkah or  Celebrity Squash Soup with Massaman Curry, Coconut and Tahitian Vanilla. 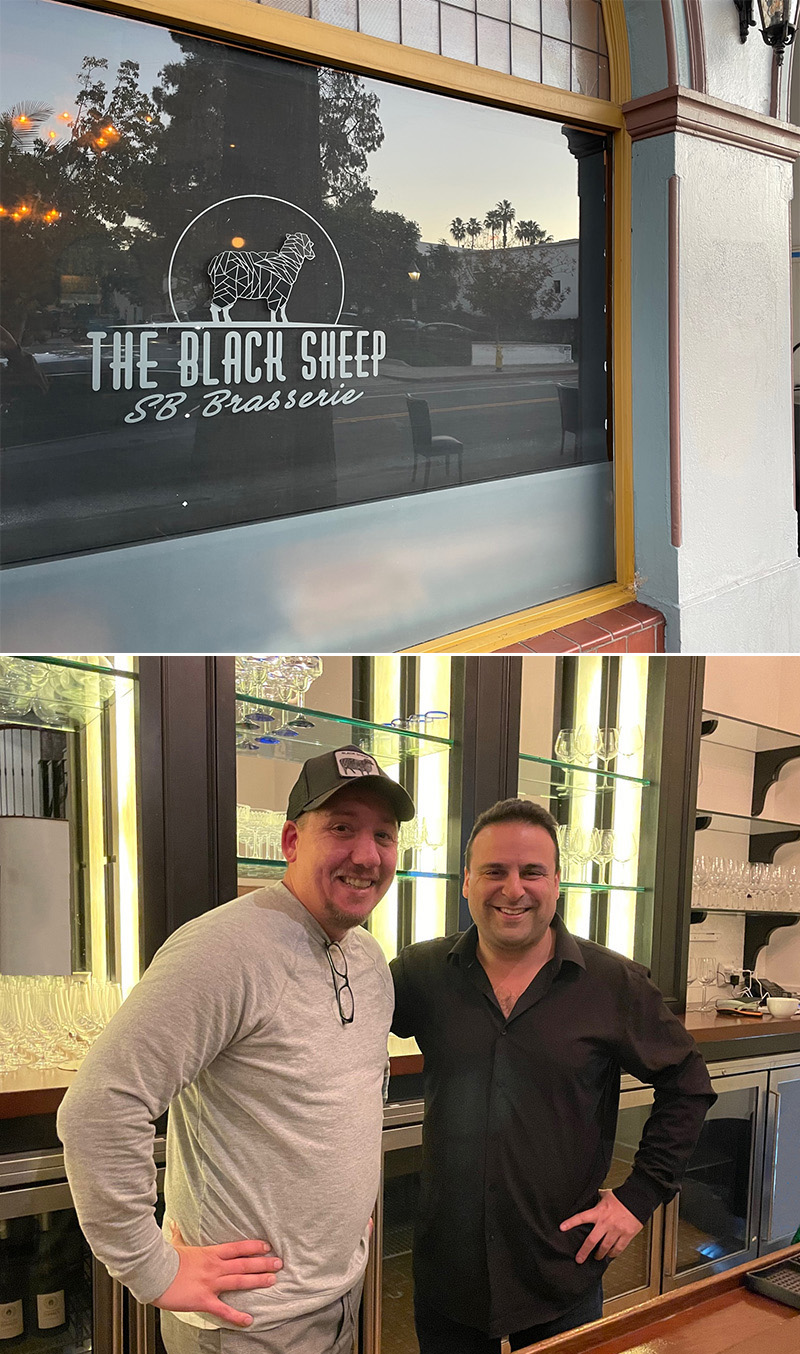