Posted on Tuesday, January 4, 2022 by The Restaurant Guy

Stearns Wharf is more than a nice place to watch boats or fish, it’s a structure that changed the face of Santa Barbara-literally. 150 years ago, Santa Barbara, being surrounded by mountains, was an isolated pueblo. There were no roads into town, there was no railroad. When John Peck Stearns built the wharf in 1872 he not only opened the door to large-scale commerce and trade; he introduced Santa Barbara to the rest of the world.

Since that time, Stearns Wharf has evolved along with the city. It was a vital conduit for a growing fishing fleet. It was the birthplace of commercial diving. It served as a focal point to bring the community together.

In honor of this iconic structure’s 150th anniversary, Stearns Wharf merchants will hold Wharf Wednesdays on the first Wednesday of each month. There will be anniversary specials, a bit of history and lots of fun, family-friendly activities. The commemoration will culminate with a special celebration, complete with fireworks, in October.

Before the wharf was built, lumber was thrown overboard and the buyers had to pick up their share off of the beach. Up until the wharf was built, buildings in town were almost exclusively made from brick and adobe. For a brief while, Stearns tried using Eucalyptus instead of Douglas Fir for pile replacement. The trial failed miserably. The wharf has had three major fires, been damaged by boats and even lost a 100-foot section to a water spout. Stearns Wharf is 2,300 feet long and has an area of 3.8 acres and is supported by 2,307 piles. 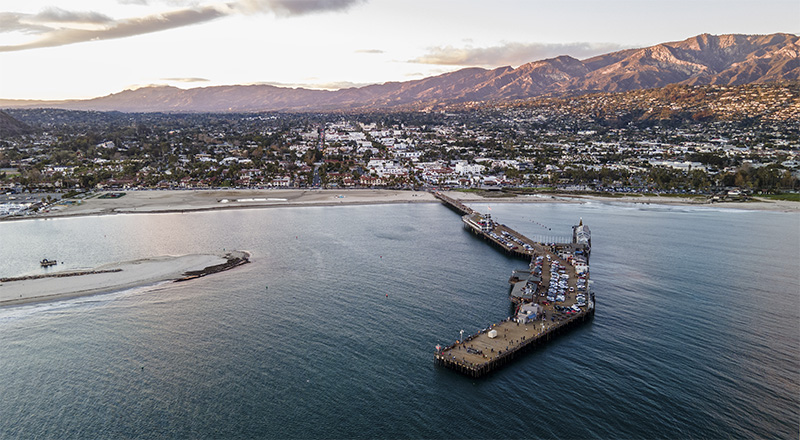