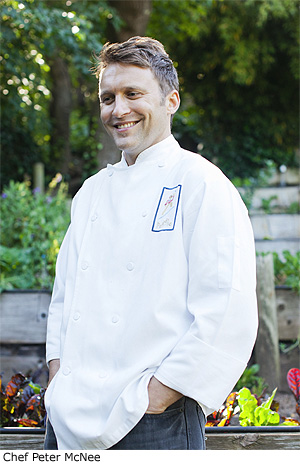 Restaurateur Larry Mindel and Chef Peter McNee will be opening Convivo restaurant and bar this spring at the newly remodeled Santa Barbara Inn, 901 East Cabrillo Boulevard. Convivo, whose name means ‘to come together’ and is the root word for the Latin term for ‘feast.’ McNee describes his style of food for Convivo as ‘Nomad Italian.’ “The foundation – our soul – is Italian but our destination is Santa Barbara and the menu draws from different styles and traditions along the way,” said McNee. His menu will feature cicchetti (small plates served in bite size portions), shareable antipasti, house-made pasta, wood-fired pizza and a bounty of seafood and meats roasted over a wood fire. Many dishes are served family-style and everything can be shared. “Great meals are ones shared with friends and family. Conviviality is a central theme of the restaurant and the seasonally changing menu,” said McNee.

A full bar featuring craft cocktails and local brewers will anchor the 62-seat restaurant. A brick outdoor patio offers al fresco dining with a view of the Channel Islands. An extensive wine list including wines on tap will draw primarily from the Santa Barbara AVA. Located just steps from the ocean, Convivo will serve breakfast, lunch and dinner at the 70-room Santa Barbara Inn and provide catering services for the 80-seat banquet room. “Santa Barbara’s bounty of ingredients rivals that of the Bay Area,” said McNee. “It’s a special place, rich with wonderful artists, small independent farmers, ranchers, fisherman and vintners. You don’t have to go farther than the Santa Barbara farmers’ market to see why I’m excited about opening Convivo. This community of artisans is a big reason my wife and I want to live in Santa Barbara and raise our young son here.”

After graduating college, McNee left his home state of Minnesota for California to pursue a career as a chef in San Francisco. While attending culinary school he worked at famed Stars and later at Tra Vigne in Napa Valley. Not satisfied with his stateside teachings, Peter embarked on a yearlong culinary pilgrimage to Italy to cook with the ‘nonna.’ While living with host families, cooking and traveling throughout the country, he fell in love with Italian food and culture. Returning to the Bay Area, he was drawn to iconic restaurateur Larry Mindel, the founder of Il Fornaio restaurants, and his shared passion for Italy. As Executive Chef at Poggio, McNee and owner Mindel formed a lasting friendship and partnership. The restaurant has earned multiple 3-star reviews from the San Francisco Chronicle and placement within the coveted “Top 100 Restaurants in the Bay Area” rankings each year since 2008. Poggio recently was included in the 2016 Michelin Bib Gourmand list for the San Francisco bay area.

Santa Barbara Inn owner Richard Gunner and Mindel opened an Il Fornaio restaurant together some twenty years ago at the Pine Inn in Carmel. “When Richard showed me what he and his family were building along the Santa Barbara waterfront,” Mindel stated, “I knew I wanted to be part of this beautiful property and I knew exactly who my partner would be.”

Chef McNee was Mindel’s one and only choice to helm the kitchen at Convivo. Mindel and McNee envision Convivo as a gathering place where fellow Santa Barbarians and guests from around the world can do just that – come together to catch up on life, grab a drink and share a meal while watching the sunset. As Mindel puts it, “The really great restaurants are both a destination for the weary traveler and a place for locals to meet and unwind.”

4 Responses to CONVIVO COMING TO CABRILLO