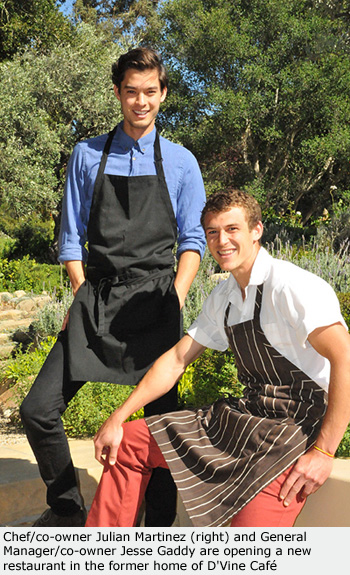 Barbareño will be led by chef/co-owner Julian Martinez, who has seven years of restaurant experience including serving as the head chef and kitchen manager of Doc’s of the Bay in Emeryville, CA, sous chef at Wexler’s in San Francisco, CA, and server at the French Laundry in Yountville, CA. General Manager /co-owner Jesse Gaddy will run the dining room.  Gaddy managed the Shakedown Café in Claremont, CA, is a studying sommelier at Deep Sea Tasting Room, has worked as apprentice butcher at the Old Fashion Country Butcher in Santa Paula, and worked the Chef’s table at Revival Bar and Kitchen in Berkeley, CA.

For dinner, the menu will be centered around modern interpretations of traditional dishes that are rooted in this area. Some dishes that exemplify Barbareño’s cuisine are Ranch Agnolotti with caramelized carrot puree, roasted celery root, and buttermilk; Santa Maria BBQ with 12-hour tri-tip, tomato coulis, cilantro oil, and pinquito beans; and Chilled Avocado Soup with basil, white wine, and avocado blossom honey.

To complement its menu, Barbareño will feature a small bar that stocks unique wines of California, with a focus on the Central Coast. Craft beers will also be offered, sourced from small-scale California breweries.

“The idea for this restaurant really came about when I began studying the roots of Italian and French cooking,” says Martinez. “In those cultures, not only does each region have its own cuisine, but every small town and village has its own unique style of cooking, based on the climate, geography, history, people, and local traditions…everything that makes that place special is really celebrated it in their food. We want to bring that micro-regional ethic here to Santa Barbara to create an experience that couldn’t come about anywhere but here.”

Barbareño is slated to open mid-July. Hours will be Wednesday – Sunday, 5:30 – 10 p.m., and will eventually expand to brunch service on the weekends and casual lunch service during the week.