RUMOR OF THE MOMENT

Posted on Tuesday, January 31, 2012 by The Restaurant Guy 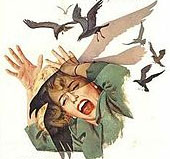 Ever since Ruth’s Chris in La Cumbre Plaza closed last June the rumors about a potential replacement have been flying at me from all directions, kind of like Alfred Hitchcock’s The Birds.

I am able to successfully dodge most of them including a common species named Factoria Cheesecakus. Though waving my arms in the air seems to help keep them away, occasional one makes an impact, like last December when I published a rumor that Yard House was a strong candidate.

This morning I was going for a run out on the beaches near Ellwood in Goleta when a rumor suddenly swooped down, landed on my shoulder and grabbed my ear, telling me that Yard House is no longer in the running and that BJ’s Brewhouse is now the leading candidate to take over half of the space formerly occupied by Ruth’s Chris. BJ’s has 115 locations throughout the country including California, Texas, Arizona, Colorado, Oregon, Nevada, Florida, Ohio, Oklahoma, Kentucky, Indiana, Louisiana and Washington. BJ’s offers beer, burgers, steaks, pizza, pasta and more.

You heard it here first.

23 Responses to RUMOR OF THE MOMENT